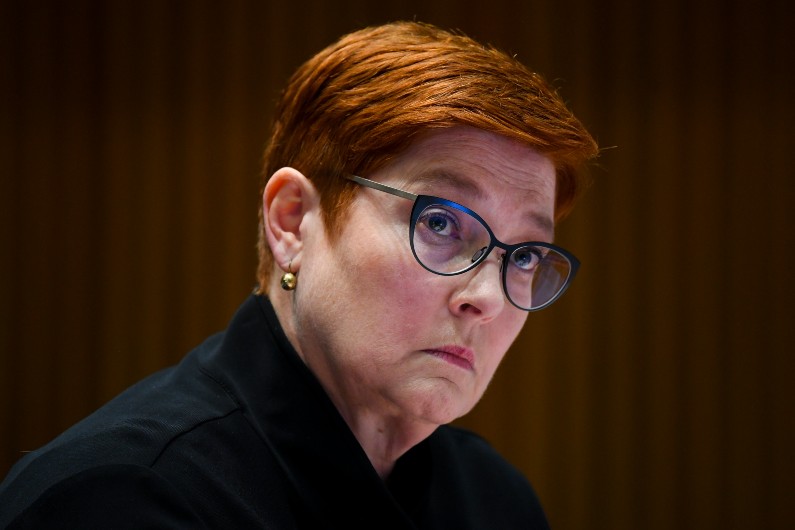 Russia’s announcement that the eastern Ukrainian regions of Donetsk and Luhansk were considered by Vladimir Putin as independent states has no validity under international law, said Marise Payne.

The Russian president used a live televised broadcast of an extraordinary meeting of the National Security Council to reveal that his administration would send troops to Donetsk and Luhansk for “peacekeeping” reasons.

The news follows a series of high-stakes diplomatic talks between Russia and France’s Emmanuel Macron, as well as hopes that Putin would agree to direct talks with US President Joe Biden on the condition that Russia promise not to. to invade.

In one statement tuesday, Australia’s foreign minister said Putin’s statement blatantly undermined Ukraine’s sovereignty and territorial integrity. She went further, tweeting that no one would be fooled by Russian “propaganda”.

“We condemn President Putin’s announcement that Russia is deploying so-called ‘peacekeeping forces’ in eastern Ukraine. These personnel are not peacekeepers,” Payne said.

“The Australian government is coordinating closely with the United States, the United Kingdom, the European Union and other governments around the world to ensure that Russia’s aggression will come at a high cost.”

The recognition by Russia of two separatist territories of #Ukraine is a violation of international law, the territorial integrity of Ukraine and the Minsk Agreement. Russian propaganda does not convince anyone. 🇦🇺 continues to work with partners to ensure high costs for Russia’s aggression.

Tuesday, Biden announced sanctions against the so-called republics of Donetsk and Luhansk and said the United States would cut ties with Russian banks if Russian troops entered Ukrainian territory.

The White House revealed its plan for an initial set of sanctions against Russia this weekend, which included adding certain Russian nationals and companies to its Specially Designated Nationals (SDN) list with the effect of freezing their US assets. and prevent them from trading with the Americans. .

“Together with our partners, we stand ready to announce swift and severe sanctions that would target key Russian individuals and entities responsible for undermining Ukraine’s sovereignty and territorial integrity,” Payne said.

The Foreign Secretary reiterated the call on all Australians to “leave Ukraine immediately”, without delay. Australian Embassy staff have moved their operations from the Ukrainian capital of Kiev closer to the border with Poland last week.

Payne said officials have now temporarily closed embassy operations in Lviv and have been redeployed to Poland and Romania where they will continue to assist Australians seeking to leave Ukraine.

“Australia stands with Ukraine and continues to call on Russia to cease and reverse its unprovoked assault on its democratic neighbour,” Payne said.

What diplomats need to know: Walking the talk is a foil to Putin’s military threat in Ukraine