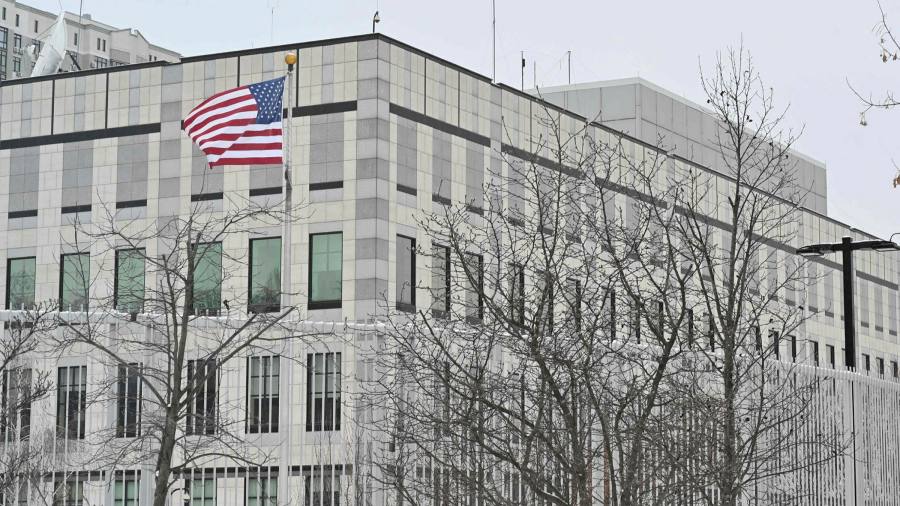 FirstFT: US and UK order embassy staff to leave Ukraine

Hello. This article is an on-site version of our FirstFT newsletter. Sign up for our Asia, Europe/Africa or Americas edition to get it delivered straight to your inbox every weekday morning

The United States and the United Kingdom have ordered partial withdrawals from their embassies in Ukraine, warning of a growing threat of Russian military action against the country.

The warnings come after weeks of rising tension along Ukraine’s eastern border, where Russia has massed more than 100,000 troops.

Russia has warned of “the most unpredictable and serious consequences for European security” if the United States does not give in to its demands to roll back NATO expansion.

After talks Friday between Antony Blinken, US Secretary of State, and his Russian counterpart Sergei Lavrov, Washington promised to send a written response to Russia’s draft security proposals. They also agreed to hold further talks.

Over the weekend, however, the British government accused Russia of planning to install a pro-Moscow leader in Ukraine. The unusual statement from Britain’s Foreign, Commonwealth and Development Office named pro-Russian former lawmaker Yevhen Murayev as the Kremlin’s preferred candidate to lead Kyiv’s government.

As tensions rise in Europe, the Estonian prime minister has called for a greater US military presence in the Baltics to deter Russia. Kaja Kallas told the Financial Times: “The biggest deterrent against Russia is an American flag.”

NATO said today that its members were putting their military forces on standby and sending additional ships and fighter jets to allied countries in Eastern Europe. Ukraine is not a member of NATO, but Western officials have warned that any conflict could affect neighbors to the west.

Meanwhile, the United States is in talks with Qatar and other major gas exporters to plan contingency measures in case a Russian invasion of Ukraine disrupts Europe’s energy supply.

Diplomatic efforts to reduce tensions move to Brussels today. Foreign ministers from the 27 EU countries will discuss the crisis with Blinken, who will tune into the meeting.

Thanks for reading FirstFT Americas. Here’s the rest of today’s news — Gordon

Five other stories in the news

1. China’s naval reach in the Western Pacific fuels tensions China has established a constant naval presence near southern Japan and eastern Taiwan, in a marked expansion of Beijing’s sea power that has drawn attention to the region as a potential future battleground.

3. Private equity avoids the parade of IPOs The industry’s biggest private companies raised at least $9 billion through debt sales last year to invest in their own buyout funds, fund growth or pay dividends to partners, executives say industry and records obtained by the FT.

4. Warren Buffett is getting closer to Cathie Wood Cathie Wood’s flagship fund Ark is set to be overtaken by Warren Buffett’s Berkshire Hathaway in a post-pandemic performance chart for the funds they manage, reflecting a dramatic change in fortunes between the two top investors .

5. World Bank under pressure to release Afghan funds Major charities working in Afghanistan are demanding more than $1.2 billion in frozen funds to pay teachers and other civil servants and prevent the collapse of essential services.

IBM revenue The software giant’s fourth-quarter financial report will be the first since completing the spin-off of the managed infrastructure business, Kyndryl, in November. IBM on Friday announced plans to sell its Watson Health assets to private equity firm Francisco Partners as it shifts its focus to cloud computing.

head of the SEC Gary Gensler, chairman of the U.S. Securities and Exchange Commission, is set to deliver the keynote address at a virtual conference on securities regulation hosted by Northwestern University. The speech comes at a time when the SEC is evaluating securities lending reforms in the wake of last year’s meme action frenzy.

Markets U.S. futures pared an earlier advance after stock markets suffered one of their worst weeks since the pandemic began. The tech-heavy Nasdaq lost 7.6% last week, while the S&P 500 fell 5.7% as the rotation from growth stocks to value stocks accelerated. Don’t press the panic button yet, says Robert Armstrong in the latest edition of Unhedged.

Italian presidential election Parliamentarians and regional representatives will start voting for the replacement of Sergio Mattarella. The vote for a new head of state could weaken the government and damage prospects for economic reform in Italy.

what else do we read

The Fed needs more diversity of thought Predictably, Republicans are already complaining about the views of Joe Biden’s nominees for the Federal Reserve Board of Governors, says Rana Foroohar. But, she argues, they are well suited to deal with a world of changing financial risks.

Russia and China’s plans for a new world order Ten years ago, neighbors were as much rivals as partners. But after a period when the two countries constantly quarreled with the United States, Xi Jinping has become Vladimir Putin’s most important ally. Today, Moscow and Beijing have embraced the rhetoric of counter-revolution.

The Metaverse Bandwidth Problem The speculative poetry of what might possibly be possible in the metaverse leaps far ahead of the more prosaic reality, experts say. A fully functional virtual world, or even just a real-time, high-definition immersive experience, will require far more capacity to transmit data between consumer and network than is available in homes around the world.

Don’t discount Hong Kong as a financial center for now Hong Kong is in turmoil after the city issued a death sentence against hamsters. But for difficult economic reasons, the future of the Chinese territory is more secure than any global rival except New York, says Robin Harding, editor of FT Asia.

Get ready for the four day work week First, it was about working from home, writes our economics columnist Pilita Clark. Today, the four-day working week is disrupting business life in ways that would have seemed unthinkable before Covid-19. Young managers are much more interested in the idea than the older leaders they are about to replace.

FT San Francisco correspondent Patrick McGee looks at the controversial rise of connected fitness. Peloton fans and peers describe the gamified experience as a way to get fit, or even build community, without feeling uncomfortable or vulnerable in the gym.

Thanks for reading and don’t forget you can add FirstFT to myFT. You can also choose to receive a FirstFT push notification every morning on the app. Send your recommendations and feedback to [email protected]

Newsletters recommended for you

EuropeExpress — Your essential guide to what matters in Europe today. register here

The week ahead — Start each week with an overview of what’s on the agenda. register here