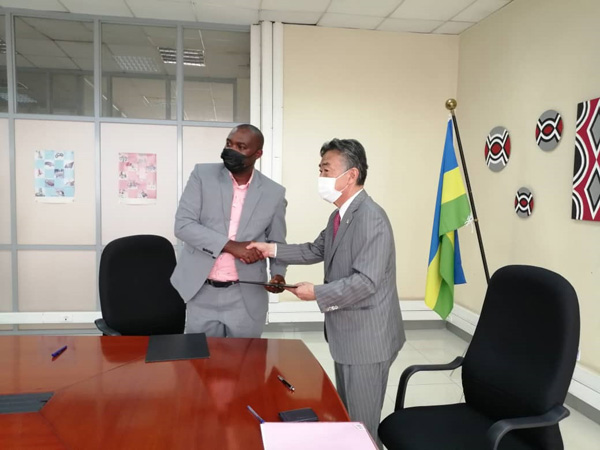 The Japanese Embassy in Rwanda has signed two funding agreements with civil society organizations to improve access to drinking water and the rehabilitation of feeder roads.

The duo’s funding agreements were signed between Imai Masahiro, Japanese Ambassador to Rwanda, and two local organizations including Hand In Hand for Development (HIHD) and Community Road Empowerment (CORE) at the Japanese Embassy in Kigali on 24 February.

CORE uses “Do-nou” technology by wrapping soil in a jute bag to build roads. This technology was used more than 100 years ago in Japan.

According to Amb. Masahiro, the Government of Japan will provide $89,107 to HIHD for the construction of micro-flush toilets, bio-sand water filters and rainwater harvesting tanks.

“This is the first time that HIHD for Development has implemented a project under our GGP program, and we are very happy to collaborate with them as they have extensive experience and have contributed to the water sector. and sanitation in Rwanda for 10 years,” Amb Masahiro added.

For Core, the government of Japan has pledged $333,841 for the construction and rehabilitation of feeder roads in five districts. They include the districts of Rubavu, Musanze, Burera, Nyabihu and Gicumbi.

The organization also aims to train 250 people on the maintenance, rehabilitation and construction of feeder roads.

“This is the second year of the three-year project, which aims to improve rural people’s skills in road maintenance by introducing Japanese Donou technology. The project involves different levels of government, from central ministries to local sectoral offices, and with the cooperation with these government institutions, project participants are equipped with new techniques and are expected to contribute to poverty reduction in rural areas through the improving road accessibility. », Amb. Masahiro added.

Last year in March, $334,744 was also given to CORE to facilitate the repair of feeder roads of about 1,300 kilometers for three years in 16 districts, including Kicukiro, Gasabo and Nyarugenge districts of the city. from Kigali, among others.

“The goal is to extend transportation services to residents, but also to give them those road maintenance skills,” said Yuko Yokomizo, project coordinator at CORE.

Rwanda and Japan have collaborated in several areas including health, education, infrastructure, among others.

For example, in 2019, the Rwandan and Japanese governments inaugurated the first integrated science and innovation center for children, the Keza Learning Center, which will train young engineers and future innovators.

The Rwf50 million center located in Gikondo sector – Kigali city and named after the famous dream child-Keza was launched by Japan’s new envoy to Rwanda, Amb. Imai has a public-private partnership with ten private sector investors in education and science.

The center, with a programming and robotics station, a school of natural studies, arts, culture and music, welcomes more than 150 children between the ages of three and 17, who will receive a holistic education.

“We are going to build toilets for more than 600 families, it will improve hygiene but also prevent several diseases that come from using dirty toilets,” said Isaac Mugabe Hangimana, legal representative of HIHD.

“The money will be used for what has been negotiated and all the work will also be presented to the donors, we hope to achieve the objectives as planned.”