Calling the trauma of Ukrainian refugees ‘Afghanistan part 2’, British diplomats on Tuesday derided the UK’s immigration policies and the long and cumbersome visa process for Ukrainians fleeing wartime atrocities that Russian forces have inflicted in their country of origin. Staff at the British Embassy in Kyiv have been blatantly told by immigration officials that they will not be granted refuge in the UK ‘unless they can meet entry requirements strict”. British broadcasters have learned and independently verified the claims.

Embassy staff who have worked for the UK in Ukraine have been told that they can only be accepted into Britain if they meet all the acceptance criteria for a visa, including the having a close relative or family members in the UK. Britain has its own refugee acceptance policies after Brexit and the EU’s Common European Asylum System (CEAS) no longer applies in the UK. The country has its own nationality and borders bill for asylum which is applied to Ukrainians fleeing war who are now being turned back to Calais after traveling 1,000 miles because they do not have the correct papers . So far, Britain has only approved 50 visas out of more than 17,000 applications from Ukrainians.

British population 68 million. Number of refugees from Ukraine 50.@pritipatel @BorisJohnson are you proud of your inability to help desperate people?

Diplomats who evacuated the embassy that was moved to Lviv from Kyiv pointed out misconduct and stressed they were “extremely unhappy” with the treatment they received in the UK. British broadcasters report that Ukrainians expressed their feelings to the UK Foreign, Commonwealth and Development Office (FCDO) in London. Despite the Boris Johnson administration’s vows to uphold Ukraine’s interests and sovereignty, Ukrainians themselves, including those who are close relatives in Ukraine of British nationals ‘do not meet entry criteria’ .

Over 1.7 million Ukrainian refugees are seeking asylum. The UK only accepted 300 – an embarrassment.

Londoners, charities and councils are ready to help those fleeing war in Ukraine, but we need the government to act. 🇺🇦 pic.twitter.com/l08HVHC5Sa 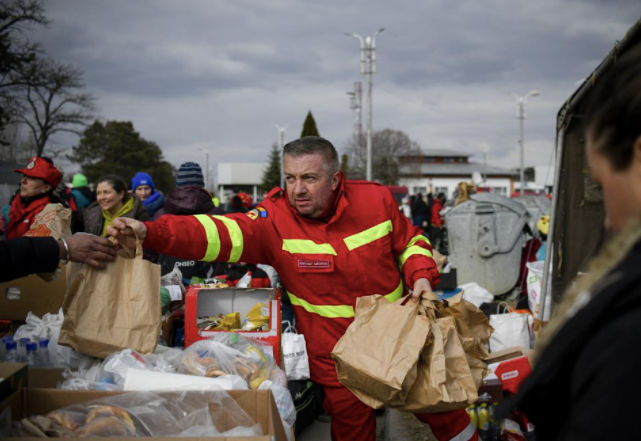 An employee of the Emergency Mobile Service for Resuscitation and Extrication (SMURD) distributes bags of food to refugees who have fled the conflict from neighboring Ukraine. Credit: AP 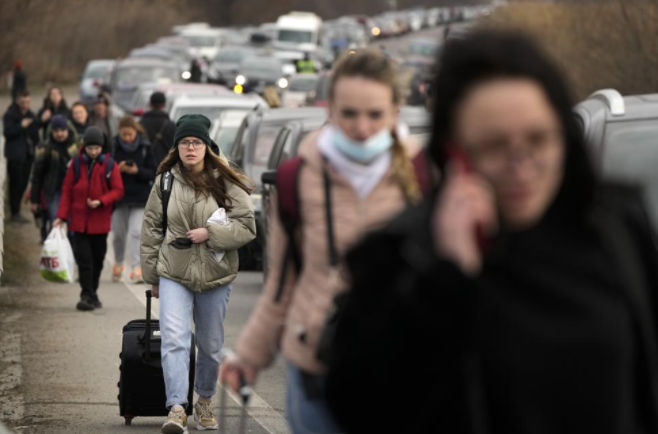 Ukrainian refugees walk alongside vehicles queuing to cross the border between Ukraine and Moldova, at the Mayaky-Udobne border crossing near Udobne, Ukraine. Credit: AP

As the Boris Johnson administration faced widespread backlash with the hashtag #BorisJohnsonout on Twitter yesterday, UK Home Secretary Yvette Cooper called the government’s record ‘shameful’. The latter wondered how Ukrainians who were close relatives of British nationals could not obtain visas to enter the United Kingdom when they had nowhere to take refuge due to the war. Alistair Carmichael, the Lib Dem’s home affairs spokesman, blasted the policies as “woefully inadequate”. Sparking more controversy and backlash, Kevin Foster, the Minister of Immigration, posted a message on Twitter advising that there were “a number of routes, including our Seasonal Worker Scheme” for Ukrainians. This caused indignation and anger. The Minister then deleted the aforementioned tweet.

British public domain capacity that might have been available to help genuine refugees from Ukraine has been allocated to the tens of thousands of young men who have sailed across the English Channel from safe France over the past three years. If you supported that, then own it and stop bleating.

Wales is ready to support refugees from Ukraine, but much more needs to be done to ensure safe and easy routes are available.


The UK government must review its immigration policies to reduce bureaucracy and do more to help those fleeing violence in Ukraine.

‘We in the UK cannot close our eyes…’: British Prime Minister

As pressure from activists and opposition parties and anger over failed Home Office policies mounted on Tuesday, 10 Downing Street announced a sweeping policy change and visa waiver for the Ukrainians. “Anyone settled in the UK will be able to bring their immediate family members from Ukraine to join them here,” Number 10 said in a statement. “This will benefit thousands of people who, right now, are making desperate choices about their future.”

Meanwhile, during a speech at the Ukrainian Catholic Cathedral in London, British Prime Minister Boris Johnson pledged his support for fleeing Ukrainians, saying: “We in the UK cannot turn a blind eye and cross to the other side”. The UK Home Office posted updated guidelines on its website, adding that visas will be issued free of charge.

In another issue pointed out by Shadow Home Secretary Yvette Cooper, the updated guidelines only apply to spouses, partners who have not been married for at least two years, parents or their children if the one is under 18, or adult parents. Any close relatives of British nationals would not be covered under the new rules.

Ukrainians who fled Russian bombardment are still being turned back by the UK.

People are being sent hundreds of miles to visa centers that aren’t open or don’t have appointments until next week.

No one in the UK with any real connection to Eastern Europe can be the least bit surprised by the combination of malevolence and incompetence that characterizes the Home Office’s response to refugees from Ukraine. 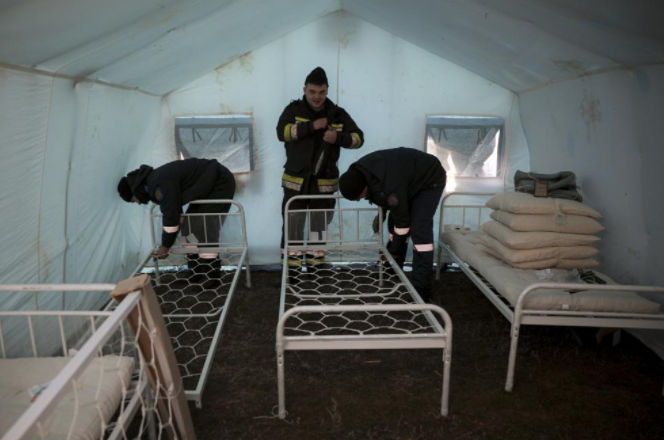 Soldiers set up beds in a humanitarian center for refugees from Ukraine on the Moldovan-Ukrainian border. Credit: AP

Cooper took to Twitter to slam Boris Johnson as she wrote: ‘What are they thinking? What about people who find it difficult to bring elderly relatives here, or Ukrainians who cannot come and live with their sister or brother here? David Lammy, the Shadow Foreign Secretary, criticized the British government, saying its action was “totally unacceptable” at such difficult times for Ukrainians.

British resident Nataliya Rumyantseva said Guardian told reporters that the British Border Force official was “rather on the defensive”. The 69-year-old child of Valentyna Klymova, who escaped intense fighting in Kharkiv, was refused entry to the UK and fled to Hungary. Another family fleeing the war reported being told by British officers that a fast-track visa the next working day would cost €1,312 (£1,100), excluding the €120 appointment fee. And a five-day process visa would cost €394 with the appointment fee of €120.

This prompted a backlash from Refugee Council leader Enver Solomon, who reportedly called on the UK government to urgently announce a ‘clear plan’ that immediately relaxes visa requirements to allow family members of Ukrainians to come to the UK United as Russia continues to bomb cities across Ukraine. . In the meantime, embassy staff have been told that entry into the UK is the responsibility of the Home Office and is handled by Home Secretary Priti Patel.

Amid anger over the fate of Ukrainians on the UK border, France accused Britain of ‘lacking humanity’ in being able to help Ukrainians fleeing war and trying to reunite with their families in the UK -United. French authorities have accused the UK of trying to stop refugees entering Britain through the northern French port city of Calais, one of the main routes for refugees to enter Britain. from the EU. 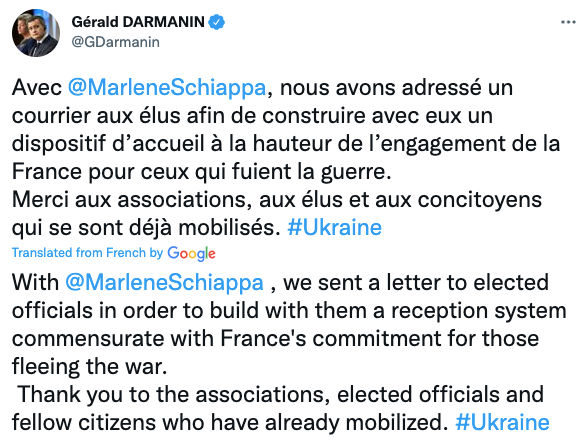 French Interior Minister Gérald Darmanin reportedly sent a defiant letter to Britain’s Priti Patel, asking London to initiate a proper consular presence in Calais and issue visas to Ukrainians. he accused the British government of having turned back more than 150 Ukrainians who were then taken in by Paris or Brussels. France slammed the UK for its response as “completely inadequate” and showing a “lack of humanity” towards wartime Ukrainian refugees.