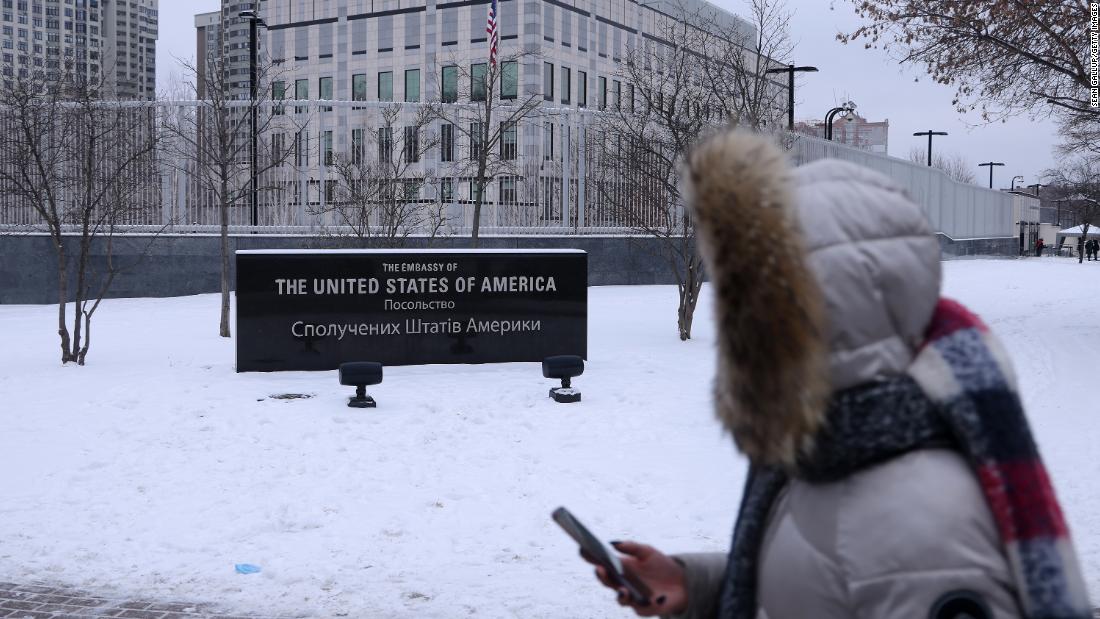 These measures are signs of growing concerns among US officials about the safety of Americans in Ukraine.

Defense Secretary Lloyd Austin has ordered members of the Florida National Guard out of Ukraine, repositioning them “elsewhere in Europe,” according to Pentagon press secretary John Kirby. The 160 soldiers have been in Ukraine since November for a training mission.

“They are leaving Ukraine and will reposition elsewhere in Europe. The Secretary made this decision out of caution – with the safety and security of our personnel above all else – and informed by State Department guidance on U.S. personnel in Ukraine “, Kirby said in a statement.

The Pentagon still supports the Ukrainian army, despite this order.

A travel advisory issued by the State Department on Saturday said it had ‘ordered the departure of most direct-hire US employees from the Embassy in Kyiv due to the continued threat of Russian military action’. .

He also said consular services would be suspended but stressed that a small diplomatic presence would be maintained in the western city of Lviv, about 80 km from the Polish border, to handle emergencies.

Several countries are also reducing their diplomatic presence and urging their citizens to leave Ukraine.

A senior State Department official said in a call with reporters on Saturday morning that it was high time for American citizens to leave Ukraine because there are limits to what the United States can do. do to help them in a war zone, which is “inherently volatile” and “extremely volatile”. dangerous.”

“Once a country or region becomes an active conflict zone, we have very few means to help our fellow citizens,” the official said.

The State Department announcement came ahead of a call on Saturday between US President Joe Biden and Russian President Vladimir Putin as US officials increased the urgency of their warnings that Moscow could be about to invade.

Prior to the call, US Secretary of State Antony Blinken spoke with Russian Foreign Minister Sergei Lavrov and spoke of “acute and shared concerns that Russia is considering launching a new military aggression against Ukraine in the coming days,” State Department spokesman Ned Price said Saturday.

Blinker tweeted that he “reiterated that further Russian aggression would be met with a resolute, massive and united transatlantic response”.

Blinken also “underscored the priority we place on the safety of American citizens, diplomatic personnel and our embassy facilities,” another senior State Department official told reporters traveling with Blinken on Saturday.

On Friday, US National Security Advisor Jake Sullivan warned that a Russian assault on Ukraine could begin soon, starting with aerial bombardments and missile attacks. He advised all Americans to leave the country for their own safety as soon as possible.

“Any American in Ukraine should leave as soon as possible, and in any event within the next 24 to 48 hours,” Sullivan said. “We obviously can’t predict the future, we don’t know exactly what’s going to happen. But the risk is now high enough and the threat is now sufficiently immediate that that’s what caution demands.”

“If a Russian attack on Ukraine continues, it will likely begin with aerial bombardment and missile attacks which obviously could kill civilians regardless of their nationality. A subsequent ground invasion would obviously involve the assault of a massive force “, he continued.

The warning came just before a senior defense official told CNN that Defense Secretary Lloyd Austin had ordered 3,000 more troops from the 82nd Airborne Division to deploy to Poland, joining the 1 700 already present. The soldiers are there to help Americans who may attempt to leave Ukraine.

Following Sullivan’s remarks, Russia criticized Western countries and media for spreading a “widespread disinformation campaign” about a possible Russian invasion of Ukraine, saying Friday they were doing so “to deflect the careful of their own aggressive actions”.

“At the end of 2021 and the beginning of 2022, the global information space faced a media campaign unprecedented in its scale and sophistication, the aim of which is to convince the world community that the Russian Federation is preparing an invasion of the territory of Ukraine,” the Russian Foreign Ministry said in a statement late Friday.

Speaking briefly after watching military exercises near Kherson in southern Ukraine, Zelensky said he needed to “analyze all information” regarding border threats.

“And the truth is that we have different information. And now the enemy’s best friend is panic in our country. And all this information is just creating panic, not helping us,” Zelensky said.

Despite these warnings, Sullivan added that it is not clear if Putin has decided to invade Ukraine.

“I want to be crystal clear. A final decision has not been made by President Putin, but we have a sufficient level of concern based on what we are seeing on the ground and what that our intelligence analysts have picked up that we’re sending this clear message and it remains a message that we’ve been sending now for some time. And it’s an urgent message because we’re in an urgent situation,” Sullivan said.

“We are in active contact with them to understand whether or not they are considering leaving,” the official told reporters, as the department continues to urge those Americans to leave the country.

The State Department official said the United States respects the decision of Americans who want to stay but encourages them to reconsider.

“There is another significant part of this group who have said they choose to remain in Ukraine, and although we strongly urge them to reconsider and advise them to leave due to the dangers we foresee,” the official said. . “We fully respect their right to make their own choices, and, you know people have, there are many reasons why people might resist leaving, including if they are long-term residents. of Ukraine.”

Some of the Americans are trying to leave the country now or have already left. The State Department helps them leave if they wish.

“Very few” U.S. citizens with whom the State Department has been in contact have expressed an inability to leave the country, the official said. They asked for help getting new passports or visas for non-US family members, the official said.

“We continue to downsize our embassy,” Blinken said at a news conference on Friday. “We will continue this process. And we have also been very clear that all US citizens who remain in Ukraine should leave now.”

This story and headline have been updated with additional reports.